It has been a long time ago, since news has been posted on this ‘News’ page. It isn’t because there was no news, but simply too much work to also pay attention to the website. In the autumn of 2021 I already wrote about the Sine Metu 41, whose hull is now ready and transported to Belgium. In China, meanwhile, the molds for the TEN2 were being built, which is now finally almost ready. In the fall of 2021, we were also commissioned to adapt the RSC1900, where the yard started the building process  in February 2022. For an adapted interior, the construction was adapted and a new retractable keel was drawn. Simultaneously with the RSC1900, we were commissioned to adapt the Orion 49, which is being built at ‘De Gebroeders van Enkhuizen’ in Makkum. This sailing yacht also got a new keel with a retractable daggerboard and we moved a new hybrid engine under the deckhouse.

In addition to all this work, the work at Saffier Yachts continued. I started working at this yard in October 2021 and. In addition to design new models, I will also be involved in the production of the Saffiers. I will report more about this in a while. 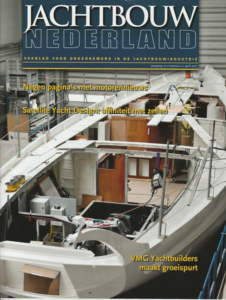