You are here: Home / Orion

The construction of the Orion Enksail 49 has started at ‘De Gebroeders van Enkhuizen’. The customers are well-known Canadian vloggers and you can follow the latest developments in design choices, hardware choices, construction, etc. on their facebook page. Because we had so many small adjustments in terms of interior, installation and the keel, we developed a completely new cutting package. A complete day out in the Batavia Haven Lelystad.
The Batavia Haven in Lelystad is the nautical backdrop for the HISWA in-water boat show, for the second year running. With more than 320 boats – from dinghy to super yacht – at the pontoons and about 100 stands with everything for on and around the water, the water sports show is the Mecca for water sports enthusiasts. With the many new models, show offers, sailing clinics and festivities in and around the marina, the whole family can enjoy themselves here all day long. The “HISWA in the water” starts on Wednesday 4 and lasts until Sunday 8 September. After her maiden trip, the Orion 49 sailed this summer along the Dutch coast. The first miles were succesfully, as well the living on board.

The Orion 49 has been launched and will be rigged by “Masten en Zo” in Sneek. 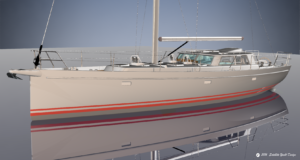 The boatyard Alubouw in Franeker has finished the second aluminium casco of the Orion 49. The hull, keel and sailplan are the same as the first Orion 49 / Cruiser (design 169). The deck, cabin, deckhouse, cockpit, transom and interior are different form the 1st Orion 49.

The boatyard Alubouw in Franeker is finishing the second aluminium casco of the Orion 49/II. The hull, keel and sailplan are the same as the first Orion. The deck, cabin, deckhouse, cockpit, transom and interior are different form the 1st Orion 49. Medio september will the yacht transported to Jurjen Mulder Jacht en Scheepsbetimmering, where the boat will be finished.

At the end of May, the hull of the Orion 49 / Cruiser was transported to the carpentry shop. Alubouw Franeker is now working on the second hull, which will be ready mid July.

New orders for SYD. This month we got two new orders. One 28ft cruiser⁄racer built in composite and a robust aluminium 50ft yacht.